Emmanuel Macron has won five more years as France’s president after a convincing victory over rival Marine Le Pen, who nevertheless secured the far right’s highest share of the vote yet.

The centrist leader told jubilant supporters at the foot of the Eiffel Tower that now the election was over he would be a “president for all”.

He is the first sitting president in 20 years to be re-elected.

The ideas her National Rally represented had reached new heights, she told her supporters. But far-right rival Eric Zemmour pointed out that she had ultimately failed, just like her father who preceded her: “It’s the eighth time the Le Pen name has been hit by defeat.”

Marine Le Pen took over the party founded by her father Jean-Marie Le Pen in 2011 in a bid to make it electable. She won more than 13 million votes on Sunday, on a platform of tax cuts to tackle the high cost of living, a ban on wearing the Muslim headscarf in public and a referendum on immigration controls.

“An answer must be found to the anger and disagreements that led many of our compatriots to vote for the extreme right,” Mr Macron said in his victory speech. “It will be my responsibility and that of those around me.” 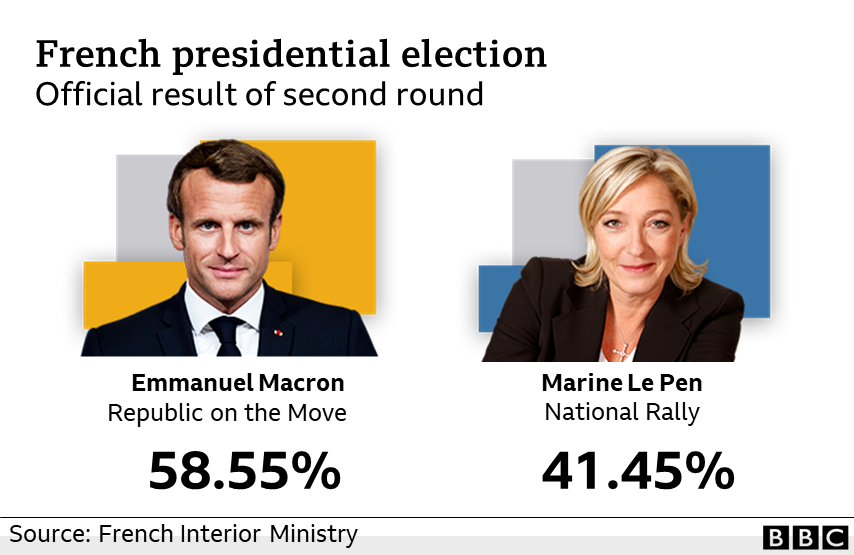 More than one in three voters did not vote for either candidate. Turnout was just under 72%, the lowest in a presidential run-off since 1969, and more than three million people cast spoilt or blank votes.

Much of France was on holiday on the day of the vote, but the low turnout also reflected the apathy of voters who complained neither candidate represented them. Voters who said they were casting blank ballots told the BBC they wanted to punish the sitting president.

Anti-Macron demonstrators rallied in a number of cities, including Paris, Rennes, Toulouse and Nantes, refusing to accept the result.

‘Ocean of absentions’
In his speech Mr Macron, 44, said his government would have to “answer their choice to refuse to choose”.

Far-left leader Jean-Luc Mélenchon, who was narrowly beaten by Ms Le Pen in the first round of voting two weeks before, was scathing about both candidates.

While it was good news France had refused to place its trust in Marine Le Pen, he said Mr Macron had been elected in a worse way than any other president. “He floats in an ocean of abstentions, and blank and spoiled ballots.”

Reaction from US and Europe
Mr Macron’s victory was welcomed by relieved European leaders, who had feared a far-right candidate offering a series of anti-EU policies.

German Chancellor Olaf Scholz was first to congratulate him, singling out their mutual challenge in responding to Russia’s war on Ukraine. US President Joe Biden also said he looked forward to “close co-operation” including on supporting Ukraine.