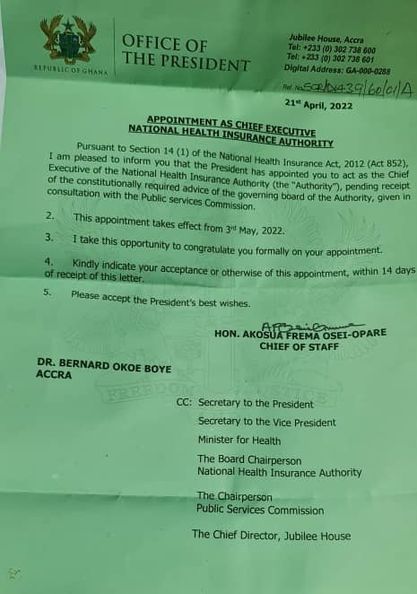 Okoe Boye lost the Ledzokuku seat in the 2020 elections after serving one term.

The National Democratic Congress’ (NDC) Benjamin Ayiku Narteh polled a total of 55,938 votes to snatch the seat from the practicing doctor who garnered 54,072 votes in the constituency.

With the exception of the late Nii Adjei Boye Sekan in 1992 and 1996, all MPs in the constituency have enjoyed one term in office.

It was reported that prior to the 2020 elections, President Akufo-Addo insisted that he will not reappoint Members of Parliament who failed to retain their seats.

It was therefore not surprising to many when Dr. Okoe Boye’s name was excluded from the list of ministerial appointees after the 2020 polls, although he served as a Deputy Minister for Health prior to the elections.

He was at some point the Board Chairman for the Korle Bu Teaching Hospital.

Okoe Boye returned to the LEKMA Hospital to continue his routine as a medical doctor after the December polls and continued to redeem a pledge of securing vehicles for some taxi drivers in the constituency.

He also made appearances on radio and television shows to communicate on behalf of the government until this latest appointment.

Blame Akufo-Addo ‘if anything happens to me’ – Amidu