Only 40 percent of Ghanaians will be transferring money electronically if it is really necessary following the approval of the Electronic Transfer Levy (E-levy), a study by Global Info Analytics, a polling company in Ghana, has revealed.

The study sought to find out how Ghanaians are responding to the approval of the E-levy.

In its last survey prior to the approval, 73% of Ghanaians were against the tax policy.

But its latest findings released on Wednesday, April 20, 2022, showed that approval of the E-levy will have no effect on 9 percent of the population sampled.

18 percent of the 5,182 respondents sampled for the survey said they will find an alternative to avoid the E-levy. 26 percent will be withdrawing their funds, while the remaining 7 percent said they don’t use Mobile Money (MoMo).

On the political side of things, 45 percent of those who will use MoMo regardless of the approval of the levy lean towards the New Patriotic Party (NPP). 33 percent have an affiliation with the opposition National Democratic Congress (NDC) while 41 percent are Floating Voters (FV).

For respondents who fall into the category of complete withdrawal of funds, 18 percent and 36 percent are sympathisers of the NPP and NDC, respectively. 22 percent are Floating Voters.

17 percent of those who said they would find alternative ways of transferring funds to avoid the tax are NPP sympathisers, 19 percent being NDC sympathisers with 19 percent coming across as Floating Voters.

With the Respondents feeling that the passage of the E-levy will have no effect on their MoMo transactions, those sympathizers with the NPP are 13 percent; NDC 6, percent and Floating Voters, 10 percent.

The last set are those who do not have MoMo. They responded with party affiliations as follows: 7 percent (NPP), 6 percent (NDC) and 8 percent (Floating Voters). 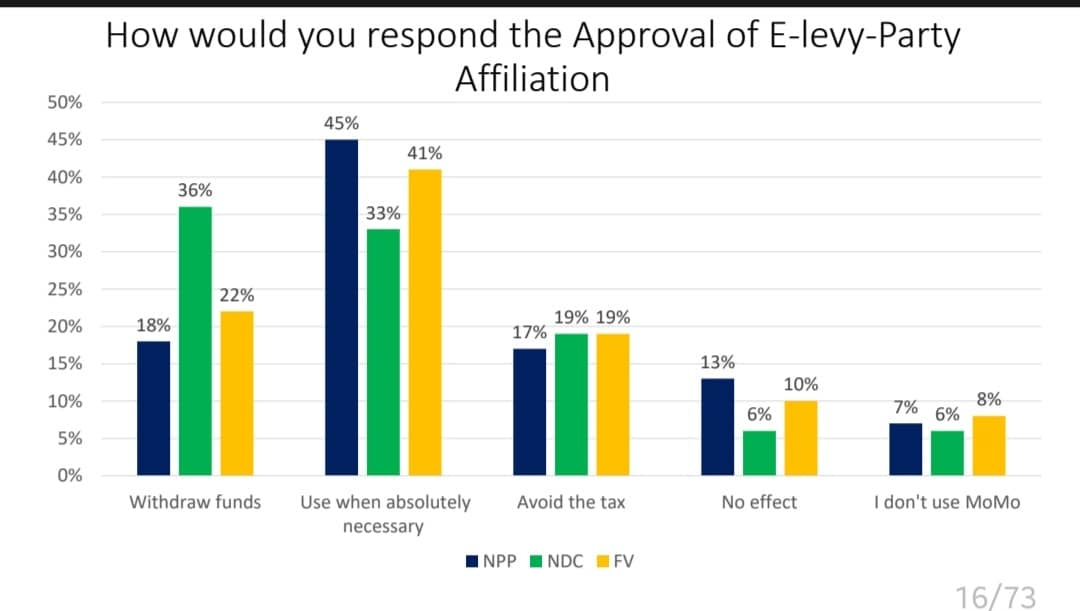 Parliament passed the bill on Tuesday, March 29, 2022, in the absence of the Minority MPs, who had walked out before the Bill was considered at the second reading stage.

The levy, which was amended from 1.75 percent to 1.5 percent on Tuesday, March 29, 2022, will be a tax on electronic transactions, which includes mobile-money payments.

The charge will apply to electronic transactions that are more than GH¢100 on a daily basis.

Critics of the proposal have warned that this new levy will negatively impact the Fintech space, as well as hurt low-income people and those outside the formal banking sector.

Government has, however, argued the levy would widen the tax net and that could raise an extra GH¢6.9 billion in 2022.