President Akufo-Addo has commissioned 75 greenhouses and an Entrepreneurship Innovation Centre at the Dawhenya irrigation site in the Greater Accra Region, to boost local vegetable farming in the country.

Addressing the commissioning ceremony of some seventy-five (75) greenhouses and the Entrepreneurship Innovation Centre, under the theme, ‘Entrepreneurship and Innovation – Key to Ghana’s Economic Transformation,’ President Akufo-Addo said the greenhouses are a major step in his government’s quest to modernize agriculture in the country. He added that the economic benefits of the project and the entrepreneurial talents that will be developed at the Centre will go a long way in supporting the job creation efforts of government.

“The World Bank estimates that agriculture and agro-business together, could command a one trillion ($1,000,000,000,000.00) United States dollar presence in Africa’s continental economy by the year 2030, compared to three hundred and thirteen billion (313,00,000,000.00) in 2010, if more irrigation, smart business and trade policies and a dynamic private business sector are harnessed to work side by side with government and link farmers with consumers in an increasingly urbanized Africa,” President Akufo-Addo said in his address.

“That is why today’s event is of such significance as we embark on a journey to modernize agriculture through greenhouse technology which is a major flank of government’s Programme for Planting for Food and Jobs. At this facility, the reliance on favorable weather conditions and on particular seasons for vegetable farming will now be a thing of the past,” President Akufo-Addo added. 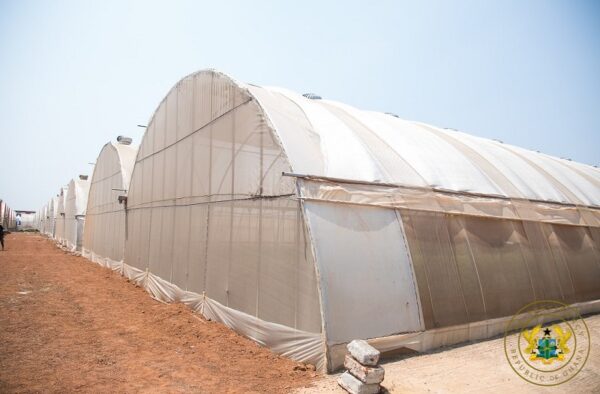 Focusing his attention on the contribution the greenhouses will bring to vegetable production in Ghana, President Akufo-Addo said cultivating vegetables in a greenhouse has many advantages;

“It allows the farmer to plant under normal conditions, it ensure good development of crops and it guarantees decent prices,” the President noted.

Produce from the Greenhouse

The President expressed delight in the fact that vegetables from the greenhouses are already being sold in shops in the country.

“Already, vegetables from this farm are being sold at Shoprite, Farmers Market, Eden Tree, amongst other places. This is highly commendable and I say a big ‘ayekoo’ to all those involved in this project,” President Akufo-Addo posited.

“Nine thousand of them have been provided funding and they have created ninety two thousand jobs in three years under our watch. Mr. President, I want to assure you that this green estates and this building will turn out hundreds of thousands of young Ghanaians who will not only grow businesses and employ people, but will also go to the world and compete and take ‘Ghana beyond aid,’” the Business Development Minister said.

The Greenhouse Project is the biggest greenhouse estate in West Africa located at Dawhenya in the Greater Accra Region. The project has huge economic benefits to the nation and it is in line with the President’s vision of creating jobs and reducing unemployment. Agricultural modernization such as the creation of the 75 greenhouses can improve livelihoods and import substitution in the country.

No case of COVID-19 recorded during voter registration exercise – EC